By Don Coppedge April 20, 2017
Leave A CommentComments
Share This

If pets have access to the pool, drowning is a risk.

Greg and Liza B. lost their beloved, five-year-old French Bulldog, Olivia, in a tragic drowning accident at their home in February 2017.

“In less than five minutes, she was gone.” Said a broken hearted Liza. 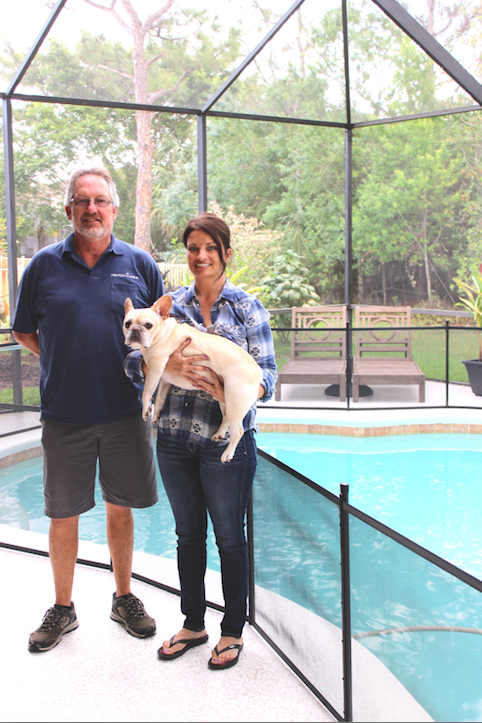 Olivia was one of two dogs in the home. She and her companion Magnus (pictured left) were one year apart. They were the best of buds! Greg and Liza love their dogs like true members of the family. With grown children off on their own, these pups helped to fill a void that children leave behind.

Olivia and Magnus would enjoy frequent outings in the community with Greg and Liza. They were loved and living the good life.

According to Liza, “Olivia was ball obsessed. When she became transfixed on a ball, she wouldn’t give up until it was back in her possession.” This is what was believed to have happened on the day she drowned. Olivia was known for knocking her ball into the pool, at which point she would bark until someone retrieved it for her. However, on this day, her parents were outside in the yard working in their garden. They were just out of sight of the screened in pool area off the back of their home. Greg and Liza were fully aware of Olivia’s needs, and had planned on attending to her as soon as they were done with the project at hand. In less than five minutes, it was too late. Greg found Olivia at the bottom of their pool.

“The guilt and regret has been so hard to bear, we miss her so much!” Liza said through tears.

Their home is a little quieter and Magnus, Olivia’s playmate, obviously misses her as well. Liza willingly and bravely shared her story with Protect-A-Child after the completed install of her pet fence by John Crews, our Martin and Saint Lucie County Protect-A-Child Dealer in FL. Her hope is to spare another family from experiencing the same kind of preventable loss.

Liza Brown on Pet Drowning from Protect-A-Child on Vimeo.

How My Pool Fence Saved My Dog’s Life

Did you know drinking pool water can be fatal to pets? I didn’t. Our dog likes to…

The month of May is the water enthusiast’s season of celebration. Memorial Day is traditionally “opening day”…

In the U.S. There are Ten Drowning Deaths a Day

Education is a critical component in drowning prevention.   The truth is, regardless of love and the…